Where we go - Big page, please be patient while it loads.

Singing schedules are available through the links page for Christian Harmony and New Harp of Columbia; and also on the "Calendar" page of this site.

The Old Fields Singers were organized so that I would have some nearby folks to sing with. For several years, singing always involved considerable travel. For us, this has been across Sam's Gap, into Western North Carolina, to sing "Christian Harmony" or down the road to Knoxville and Wear's Valley to sing "New Harp of Columbia."

Our current, and I hope permanent location, the headquarters at Sycamore Shoals State Historic area, is six miles east from Exit 24 from Interstate 26 (University Parkway - US 321).

That's about twelve minutes from my home near downtown Johnson City.

The second nearest singing is in Greeneville, Tennessee on the last Sunday of each month. We sing from another seven shape book, "The New Harp of Columbia" at the Greeneville Cumberland Presbyterian Church.

The cannon ball was fired into the church during what is variously called the War Between the States or the War of Northern Aggression. Some call it the Civil War.

When I was a boy, we often travelled from the Tri-Cities to Newport to visit family, and we came right down Main Street. Though I was often car sick, I would rouse myself to see that it was still there.

And to this day, it still is.

We sang for teachers

On Thursday, June 12, 2008, five of us, Julianne, Ellie, Mary Grace, Jeff and I sang at a session for teachers which was sponsored by the Center for Appalachian Studies and Services at ETSU. We arrived at around two o'clock and were taken to a gallery in the Reece Museum. This is in the same building that we sang in last November, but in a different room.

And what a room it was! Before the teachers arrived, the five of us sang some, and the sound was just amazing. It was so lively that it was difficult to speak; but our five voices sounded like a hundred.

Jeff kindly consented to lead the singing after I did a bit of talking. Once again, the class was very receptive and did a very good job on our "learning songs"

Thanks to Jane MacMorran, Director of Appalachian, Scottish, and Irish Studies and all the folks at the CASS for, once again, helping us to share the tradition with new folks.

We sang at a wedding

On July 19, 2008, around twenty of us from at least three states, sang at the wedding of Jeremy Shipp and Sarah Baird in Sulphur Springs.

We sang in the mountains

We sang at a mansion

Third Sunday in August. Pictures made by a genuine photographer, my friend Bill Speight. If you have need of his service, I would be happy to put you in touch.

Old Folks Day at Morning Star Methodist Church, Dutch Cove, near Canton, North Carolina. This is the singing that Zack Allen mentions in his Foreword to the last printing of our book. And this year was the 118th.

This was Quay Smathers' church and his daughter, June Jolley, has seen to it that the singing tradition is carried on there on the second Sunday in September. She us very careful to make everyone welcome, just like family.

The picture isn't the best, but it is absolutely the most bounteous feast I have ever encountered in my singing travels. And I am not sure of the 63 feet of food. Zack says that is how much table Quay built. I'll just say, you do not have to go very far to fill a plate.

We sing after the church service and the dinner. This was only the second year for us; and as last year, there was a good delegation of students from Warren Wilson College who came and fully participated.

There is no place I have ever sang where I feel the connection to the past as I did here. How I wish I could have known the old folks.

Chad, Leslie, Ellie and Mary Grace joined Julianne and me to sing at the Exchange Place folk arts festival. We had several "first timers" join us and some of them indicated they would be coming to the Old Fields.

Many of the staff of Exchange Place took time out from their duties to join as well. We thank them for inviting us and hope that the singing takes root at this old farm.

There was a contingent of visitors from the Sacred Harp tradition who joined us from afar and we started early and stayed late. Minutes will be posted. I posted videos on YouTube.

Christian Harmony crossed another state line, as we took the singing to southwest Virginia for a two day event on October 3 & 4. The location was the Cove Ridge Center at Natural Tunnel State Park and The Arts Council sponsored the event. The weather turned definitely fallish – on the way home coming down Hwy 23, I saw a patch of kudzu that had been frostbitten.

We began on Friday evening with Dan Huger teaching a school. Then we sang until 9 o’clock, taking time to practice parts on the called songs. On Saturday morning, Jane Spencer warmed up the class and answered some questions. We then proceeded into singing. With eleven experienced singings anchoring, we made a good sound; and those who had travelled some distance to support were rewarded with multiple opportunities to lead. Minutes are posted on the minutes page.

Our hosts provided overnight lodging for the travelers and that gave us an opportunity for some extended visiting which we don’t usually have. The staff of the park was very cheerful and helpful. Everyone seemed very glad to have us there and that is a good feeling!

We will schedule another singing, probably at the same location. In the meantime, we look forward to some Virginians joining us at the Old Fields.

Over forty singers, representing four states attended the second annual all day singing. I call it the second because it was reorganized last year.) There had been singings before this.)  Also, I refer to it as second, because the third is already planned for the Saturday before the first Sunday in November, 2009. That will be October 31.

Only about eight of the singers were travelers from distant lands. That leaves over thirty of us who are, or will be, Old Fields Singers. We did have a few first timers from the immediate area, who we hope to see again. And we had a very good number of the folks who have faithfully come since we moved to the park in April. This makes me confident that the new year will be a great year for singing the shapes here in upper east Tennessee.

If I were a better writer, perhaps I could do justice to the dinner that was laid out. How about chicken and dumplings, beef stew, baked beans, three dishes of devilled eggs (a memorable dinner has two), collard greens, corn bread, fruit and vegetable trays and much more. And then - the desserts. There was an apple butter stack cake which was my Daddy’s favorite, but Mama very rarely made it because it was too much work. There’s a picture of the dessert table.

We had a picture perfect mid autumn day with the leaves at their peak. The singing was good. I had one of the regulars (an alto) tell me, “For the first time I could get my pitch from the sounding of the ‘do’”. Now, that is what it’s all about. The system does work!

Finally, thanks to Jennifer Bauer and all the staff at the park for giving us the home we needed to establish the group. It is just a natural fit and where we need to be. Special thanks also to Sherri Hyder and the Friends of Sycamore Shoals who supplied all the dinnerware, plus a delicious carrot cake. And thanks to everyone who attended and will come, sit a spell and sing!

I did not get any pictures of the group. If anyone has pictures they would share, please send them to me.

I do have one video to upload to YouTube.

Randy from Louisville sent a couple of photos

In the first week of October, we took Christian Harmony into southwest Virginia at Natural Tunnel State Park. Now, at the end of November, we had us another singing, this time at St. Paul, in St Mark’s Episcopal Church. Betsy Dickenson and Beth Marshall did good work in getting publicity in newspapers, securing the singing space and providing refreshments. Alexander Garden is the contact person for this new group.

Alexander began the session with some brief instruction. I chimed in with a little more and then we just sang. We mostly broke each song down into parts, although we sang a very fine “Coronation” in the four parts. The class did very well. I was again impressed with how quickly folks can pick up this music and so be able sing sweet harmony. Here’s hoping that this is the beginning of much more singing.

It was a real surprise and a pleasure to see Guy Banks come in near the end. I wish the timing had been better, as we (meaning, I) could have used the help in the bass section.

Minutes are posted, on the minutes page. Where else?

The renovation and repairs being completed, the old building shined like a polished jewel. A good number of singers reflected the bright sunshine of the day as the singing was strong and spirited.

And there are some pictures.

We had our regular third Sunday singing in December. We had, I believe twelve singers present and there we some "observers" though I did see some of them at least moving their mouths some of the time. I have misplaced the minutes, which I will post when they turn up. We sang a few of the Christmas songs from the book, plus "Beautiful Star of Bethlehem" from a handout. After we sang "Holy Manna" one of the observers requested "Twilight is Falling." He said he remembered a gospel quartet singing that years ago.

A photographer  made some pictures, two of which were printed in Monday's paper. 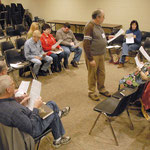 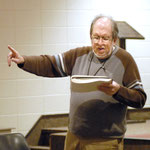